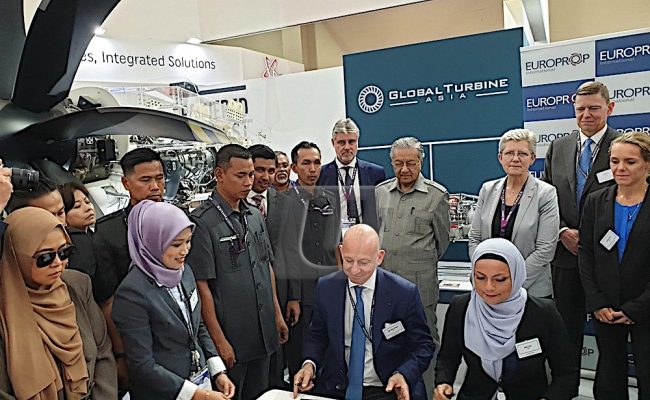 Significantly, this AMO License agreement further consolidates the partnership between EPI and GTA. The agreement marks a major milestone in the industry and with this collaboration, constitutes the first time EPI relies on a foreign third party to carry out maintenance activities on their engine. It allows GTA to perform Level 1 and Level 2 (on-base) maintenance on TP400-D6 engines, the highest level attainable outside an OEM workshop.

The successful signing today is a culmination of GTA’s efforts that began in 2015 when it embarked on becoming the Malaysian reference as Safran’s helicopter engine Maintenance, Repair and Overhaul (MRO), and also as a recognized centre of excellence for the fixed wing industry.

The partnership with EPI strengthens the foundation that GTA has been building towards becoming a homegrown Malaysian solution to the maintenance for state-of-the-art turboprop engines, with the medium-term ambition to also be a key player in the region. GTA’s aspiration is in direct support of the Malaysian Aerospace Blueprint 2030.

With the Airbus A400M and its TP400-D6 engine holding EASA certificates, EASA recognition is mandatory for any company seeking to become part of the TP400 ecosystem. The EASA 145 certification complements GTA’s Malaysian Directorate General for Technical Airworthiness (DGTA) AMO certificate achieved in 2017.

Being EASA Part 145 certified and a Europrop Approved Maintenance Organization for the TP400-D6 are key pre-requisites to be able to provide direct support to GTA’s longtime customer, the Royal Malaysian Airforce (RMAF). RMAF is a strategic user of the TP400-D6 in the Asia-Pacific region where GTA aims to extend their footprint.
Global Turbine Asia can be found in booth No B486 Mahsuri International Exhibition Centre, Langkawi International Maritime and Aerospace Exhibition 2019 (LIMA’19).